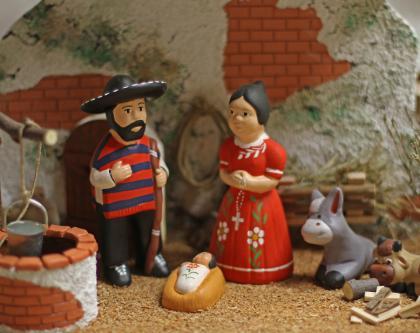 Being involved with Latin America is part of my job. Even if it weren’t, I would still be a huge fan of the Christmas traditions in Mexico. There it isn’t just a one-day celebration. The Christmas season begins on December 12, the birthday of the Virgin of Guadalupe (la Guadalupana), and ends on January 6, the Epiphany. Many people take the last two weeks in December off — there is so much to celebrate.
Three of my favorite traditions at this time of year are Las Posadas, Piñata, and the events of Christmas Eve.
Las Posadas
Las Posadas is a celebration that begins on December 16, and lasts for nine days. The theme — no room at the inn — is the same everywhere, but each village places its own touch on the festivities. The basic idea involves a girl and boy being chosen to portray Mary and Joseph. On each of the days, the costumed children set out after dark from a local church, with Mary often riding a donkey. The procession which follows Mary and Joseph carry lanterns or candles. The couple stops at homes along the way, asking for a room for the night.
It is prearranged in some versions that everyone refuses. In others, there is a refusal at two homes. At the third home, half the group goes inside the home and the others remain outside. The villagers who are outside sing a song requesting a room for the night, and those inside sing a reply.
Piñata
The procession led by the children portraying Mary and Joseph returns to the church, where mass is held. After mass, there is a piñata party for the children.
A piñata is a container, usually formed from papier-mâché, but sometimes made of cloth or pottery. It is filled with candy and small toys and suspended overhead by a string or elastic cord. Children are blindfolded one at a time, given a long stick, and spun around a few times. They take turns waving the stick in the air, trying to break the container. The turn lasts as long as it takes for the others to sing a song. When the container breaks and the contents spill out, it’s a bit of a madhouse, with all the children present scrambling to gather as many goodies for themselves as they can. After the piñata party, it’s time for dancing and refreshments.
Christmas Eve
Christmas Eve, rather than Christmas Day, is special in Mexico. A verse is added to the Ave Marias, telling the Virgin Mary that the time has arrived. At midnight, fireworks, bells, whistles, and other noisemakers announce the birth of Christ. Most villagers attend the Rooster’s Mass (Misa de Gallo) after the Christ Child arrives. They return home and enjoy a feast of traditional food. Depending upon the part of Mexico in which the village is located, the food might consist of chile rellenos, tamales, rice, menudo, and a sweet drink (atole). The mass is called Miso de Gallo because it is believed that the only time a rooster crowed at midnight was when Christ was born.
Christmas Gifts
Most children in Mexico do not receive gifts on Christmas Day. The Three Wise Men distribute presents in the children’s rooms early in the morning on January 6, while the young ones are asleep. Tradition holds that the Three Kings visited the Baby Jesus on January 6 bringing gifts so Mexican parents do the same for their children.
Have you thought about starting a Mexican tradition in your company? Why not consider offering trip rewards to those of your employees who exceed established sales goals? Contests with a substantial prize are a great way to get people to work harder and make more sales. Submit this Request for Proposal, and let’s get you started.